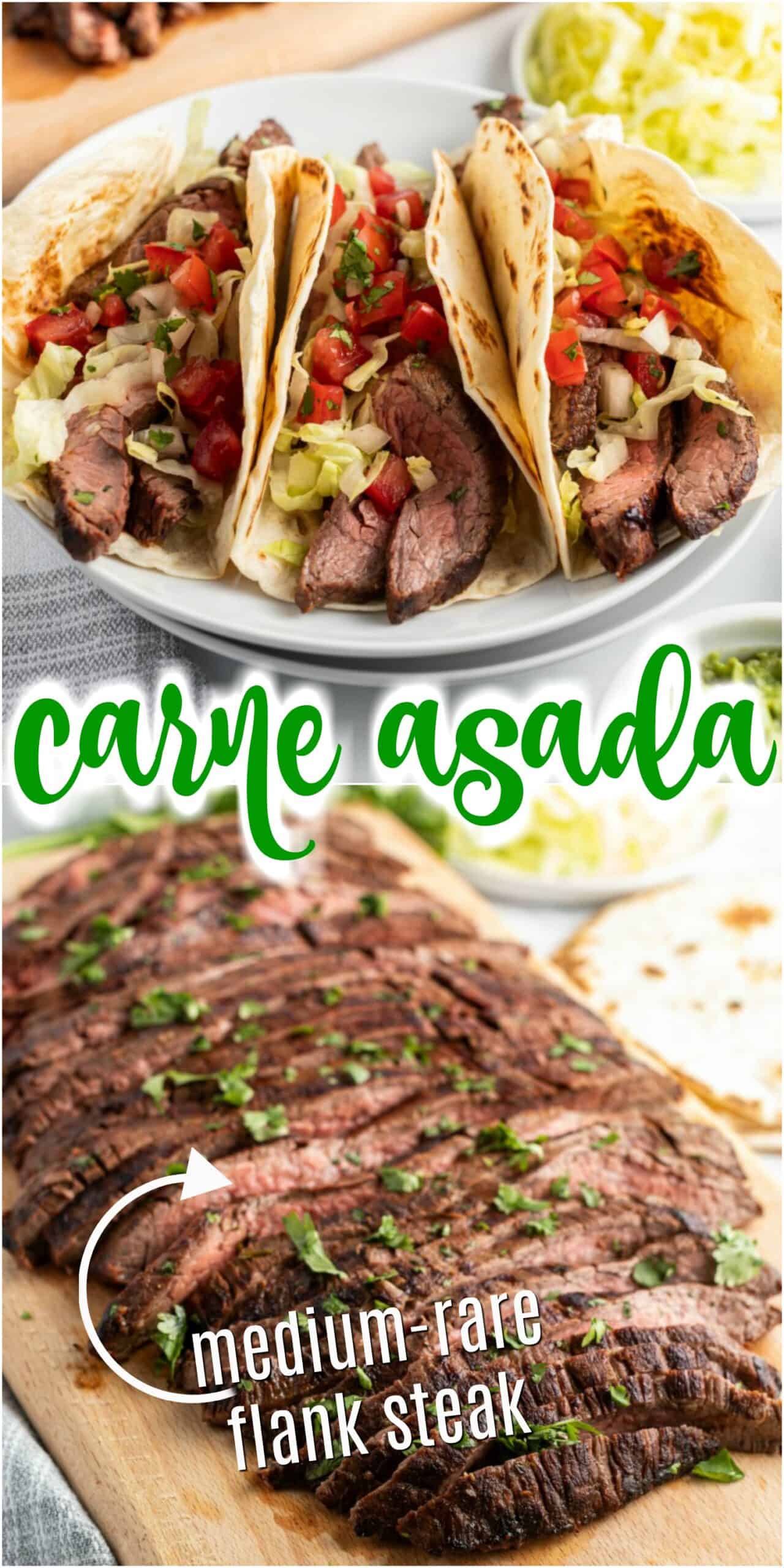 Marinated steak that’s grilled to perfection and served on tortillas, Carne Asada is a Mexican classic. This Carne Asada can be made at home right on the grill or stove top!

As much as I love Tex-Mex, Cal-Mex and all the other regional variations on Mexican food, Carne Asada is the authentic Mexican dish I crave.

I’ve heard from my friends who are picky about their Mexican food that one of the ways they judge the quality of a taco joint is by its carne asada!

While I’d enjoyed it at restaurants and taco stands for years, it’s only recently that I discovered how easy it is to make at home!

What is Carne Asada?

This Mexican dish consists of steak marinated in a spicy lime sauce before being grilled and sliced into thin strips.

The name carne asada literally translated to “grilled meat.” I love that–right to the point!

Traditionally this meat is seasoned and cooked over a charcoal pit. I made mine on my home grill on a nice spring day and it was just as delicious. If you don’t have a grill, you can even make the meat right on your stove top in a heavy skillet.

It’s also wonderful tossed into salads, served over cilantro lime rice, stuffed into burritos or any other way you enjoy delicious, flavorful beef!

There are some carne asada recipes out there with no marinade at all. You just season the steak with some salt, grill, slice and eat. I’m sure those taste just fine. . .me? I love carne asada marinade.

The citrus marinade turns an ordinary piece of steak into something remarkable! It adds a ton of flavor and tenderness to the meat without any hard-to-find-ingredients.

The marinade I use has lime and garlic, but I also like to include orange juice and orange zest. It’s still heavy on the lime flavor but the orange adds a touch of sweetness.

I tasted the marinade with a spoon before adding the steak and . . . woah!

I probably could have eaten a whole bowl of that marinade by itself, if I didn’t think it would leave my family questioning my sanity. It’s THAT good!

This marinade is also delicious on pork tenderloin, pork chops, and roasted chicken!

Here’s everything I put in the marinade:

What kind of meat to use for Carne Asada

I used flank steak in my Carne Asada recipe but skirt steak works beautifully, too. Both are inexpensive cuts of meat that still have a good amount of flavor.

One of the things I like about this dish: You don’t need the most tender cut of meat ever to make a good carne asada!

Of course, if you’d like to use sirloin or another kind of steak here, go for it. For the sake of tradition (and my bank account), I personally like the flank steak!

Why this recipe is the BEST

Serving homemade Carne Asada to your family or dinner guests is guaranteed to impress. BUT it’s one of those “Wow!” recipes that also happens to be easy to make.

If you can combine a few ingredients in a bag and grill a steak, you can make delicious Carne Asada!

The most time consuming part of making Carne Asada is allowing the meat to marinate. I tried this a couple of times letting the meat marinate for different lengths.

The steak tasted best after it had at least 3 hours to soak up all the zesty spicy marinade! You can leave it in the marinade for up to 24 hours, so don’t be afraid to prep this the night before!

The second time I made the Carne Asada, I popped the steak into the Carne Asada marinade right after breakfast. By dinner time, it was ready to grill. Less than 30 minutes later, we were digging into our tacos!

How to Make Carne Asada

STEP 1. Combine all the ingredients for the marinade in a large ziploc bag. Add the steak and shake to coat. Refrigerate for at least 3 hours or as many as 24.

STEP 2. Discard the marinade and grill the steak on a grill heated to medium high. Cook to desired done-ness on the first side, then flip and cook the other side. (This took about 5 – 7 minutes per side for medium rare steak.)

STEP 3. Allow the meat to rest for about 10 minutes. Then slice into strips against the grain and serve hot!

What to serve with Carne Asada

Serve this meat alongside a stack of fresh warmed tortillas. We love it with corn tortillas but it tastes great in a flour tortilla, too.

Any of your favorite taco toppings are delicious served with this meat.

Set up a make-your-own-taco-bar so everyone can make their own perfect dish.

Have leftover meat? Do what I did and save it for your lunch salad the next day.

Tips and Tricks for Carne Asada 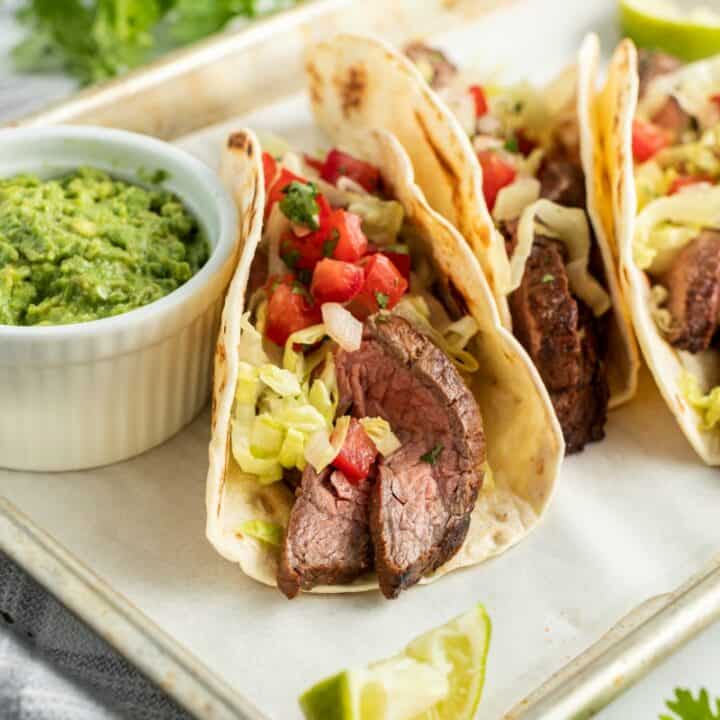 Marinated steak that's grilled to perfection and served on tortillas, Carne Asada is a Mexican classic. This Carne Asada can be made at home right on the grill or stove top!

Make this easy Carne Asada recipe to spice up your next taco night! 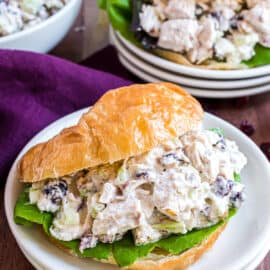 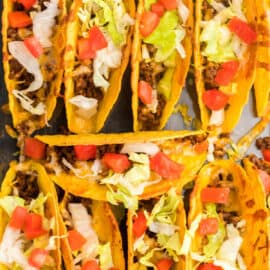 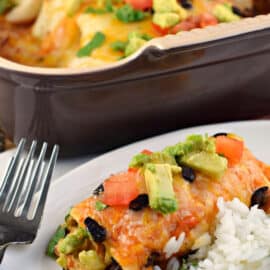